Good eats along I-64 in Virginia and a few beyond!

On my way to Richmond from Tidewater I have several routes I can take: some fast, some a bit slower paced. From trips to Williamsburg over the years, I knew that I-64 was the direct route home while Route 5 was the “back road” taken many years by travelers before me and before VDOT’s inception.

These roads are tree lined just as are those along I-64. For some reason though I feel that these trees are older, have more history, have seen more history. I feel like these trees are of Narnian like quality possessing the ability to whisper historic colonial secrets that were long thought lost to the wind. On my way to Richmond I drive through places whose names pay homage to English roots: Windsor, Waverly, Wakefield and Disputanta.

Disputanta? Okay. Maybe Disputanta doesn’t have English roots but it is a place I pass on my way to Richmond.

But on this trip my destination wasn’t Richmond.

I stopped by one of those boastful local joints I’m always passing on the side of the road. Customers are greeted at the door which makes me feel that I made a pretty good choice this weekend. Music played quietly in the background, drowned out by the sound of patrons conversing and servers getting orders straightened out while making conversation with the regulars.

This was a place that felt both stuck in time and modern. A man working behind the counter carried on a conversation with an older patron about farm work and fishing holes. I couldn’t help but think these conversations have been heard in the air of the surrounding area for hundreds of years.

I wasn’t sure what sort of beverages awaited me but being on a secondary road in the South, surrounded by speakers of the rural Virginia version of southern twang the only beverage I was certain was available without question or puzzlement was that beautiful summertime elixir known as “sweet tea”. 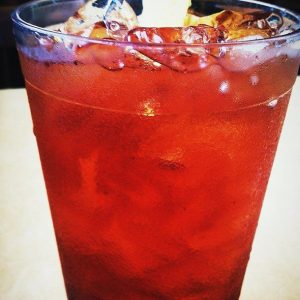 “Hey there, honey,” the older blonde waitress greeted as she approached the table. “What’ll you be drinkin?” After visits to two huge metropolitan cities north of the Mason-Dixon Line (my 11th grade history teacher would love that reference), my confidence had waned as I asked expectantly “Do you have sweet tea?”

Yeah, I know after driving around in 90 degree weather in a car with no working A/C water would be the ideal choice to replenish those lost evaporated bodily fluids. But the goal was not just to quench my thirst. I’d been missing my grandmother that day, had driven through the country where she lived the first 20 years of her life. I saw signs of the crops she helped her father harvest as a kid, one of which she hated as a result: peanuts. There was a thirst to connect to my southern roots that day in a way that a glass of water just could not quench. “I could really use a tall glass of sweet iced tea.” The server tapped the table and smile as she said “Sure honey. I’ll be right back with that.”

She may or may not have understood all of the emotions that sparked such a request but before I could even get situated comfortably at my table she was back with a 20 oz glass of liquid Southern ambrosia. I took a quick tentative sip to gauge whether or not I should follow up with a healthy swig. True ice cold refreshment. Healthy swig it is. After a few minutes of menu perusal the waitress returned for my meal order. She mentioned the special for the day was fried chicken with homemade mac and cheese. Fried chicken? But the place had “BBQ” in its name. How could I go with chicken. I asked the waitress if the mac and cheese had been prepared by someone’s mother. She laughed, leaned forward and said “It’s homemade, hun.” Well fried chicken it is.

Before I describe the meal, let me say I appreciate good fried chicken but it’s not something that I have to eat at a restaurant. It wasn’t a frequent item on the menu at the Anderson household when I was a child so it isn’t something I feel the need to try.

That fried chicken though?

Maybe it was because I hadn’t eaten breakfast or because my mind was full of memories of my grandmother, causing my taste buds to be slightly off balance when I took my first bite.

No. It was none of that. It was just really good fried chicken, chicken that had been seasoned properly and fried to crunchity perfection. Yeah, I said crunchity. If you peek at the picture above you’ll see a few other items I ordered. The green beans were standard (nothing special at all), the potato salad delicious, a yummy corn fritter, a delightfully light yeast roll and the mac and cheese tasted like it was an old family recipe with the perfect cheddar to milk ratio.

I don’t play when it comes to mac and cheese. How serious am I?

It wasn’t the kind that can compete with the stuff that comes in the blue box that your 5-year old loves. These elbow macaroni noodles weren’t just tossed in a cheese sauce. These were baked with chunks of sharp cheddar and what looked to be monterey jack, that found their way into every nook and cranny of those noodles.

It was probably some of the best I’ve had at a restaurant in a long time. So good that they apparently only serve it one day a week (Monday). *blank stare* Crazy.

Given time to enjoy my selections, I thought of my grandmother and all of the stories she told me about her years as a child in Southampton County, Virginia. I thought of how she had to walk a few miles in order to get to the school bus stop, how she learned to cook from her mom and how she worked during the summers in Norfolk to raise money for her school fees. Some of the details of those stories have slipped my mind over the years, but as I sat there not too far from the area where she lived my memory of the sweet lady that was my grandmother remains.